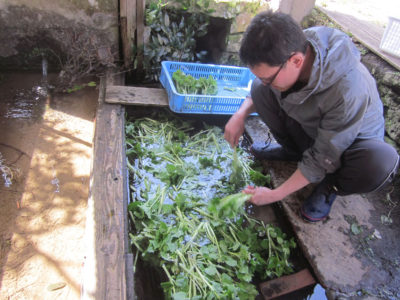 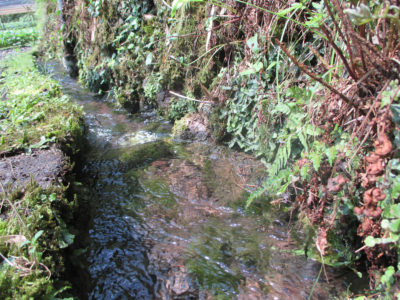 We are running Wasabi farm at the foot of Kannabe highlands in the Northside of Hyogo Prefecture. Our land got huge benefits from “Spring water” of the Kannabe volcanic eruption that took place 70 to 20,000 years ago. The amount of water is 700ℓ/sec (except waterfall of Jugo), and water temperature is stable around 13℃ through all the seasons. This precious water, well known as “Shimizu of Jugo” is supporting the village life and industry from long time ago. Water channels run in between houses and washing place called “Kawaito” are sat in each houses. This spring water has been used for production of essential food, like cultivating wasabi, breeding rainbow trout and rice farming. 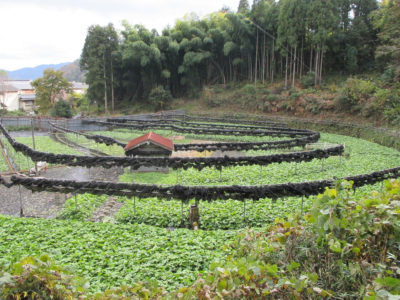 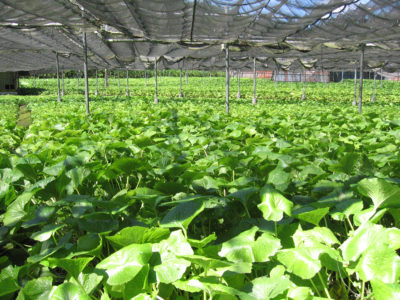 We have successively inherited Wasabi field spread from headwaters. Tradition says “It was originally a swamp, then the swamp has been cultivated by villager’s cooperation. ” Picked from hills then processed, lava stones expanded the current scale to 33a wide Wasabi field, all produced by human power. There is no other example of the wasabi spreading on the flat area behind the house, because it is located at an altitude of 80m, it is said to be “the lowest wasabi field of the highest sea level in Japan”. This cultivation has a long history that goes back to the Edo period. A book from Kyoho Era (1716〜1736) recorded that “This Wasabi was offered to the lord of the manor of Kumihama area“ 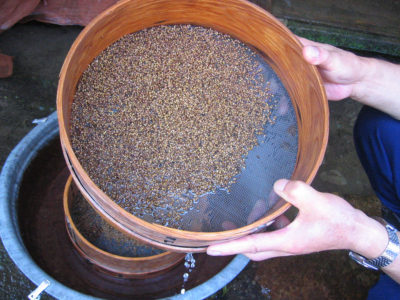 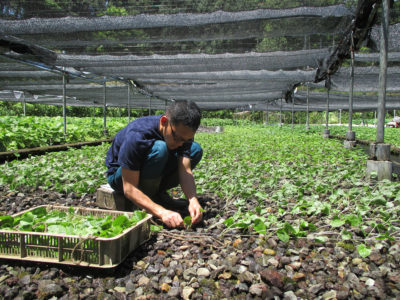 Wasabi is originally from Japan, growing wild and cultivated in each district for a long time. Homemade seeds “Daruma seed” were raised for 60 years and farmers inherited the wasabi that matches the spring water and climate of this land. Taking roots in lava stones, wasabi only grows with appreciated spring water flowing. It takes about 2 years from seeding to harvesting. When spring comes, wasabi fields are in full bloom with pure white flowers. In late May, farmers take seed pods that swelled and turned to purple, then they preserve the seeds.

In the Kannabe highlands, “black soil” made from volcanic ash is distributed, and plateau of tasty vegetables are cultivated. In addition, eco-friendly rice making is spreading as much as broadleaf trees spread and rich natural forests are also preserved. Water that percolates the ground of the Kannabe moves and springs out on this land. The flavor of wasabi is brought about by rich forests and the activities of Satoyama. (Satoyama means woodland close to the village)

Kannabe is also well known as an attraction of Japanese pampas grass. Because wasabi hates strong sunlight, we have a light shielding net on the ceiling, but I used Japanese pampas grass until 1970. I used to cut it from the plateau, dried and in the winter with my family we were knitting sunshade. 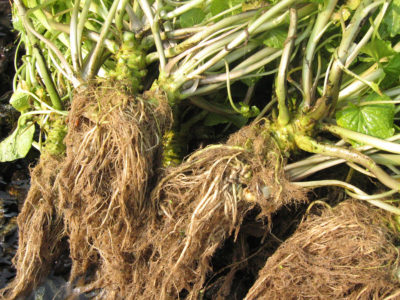 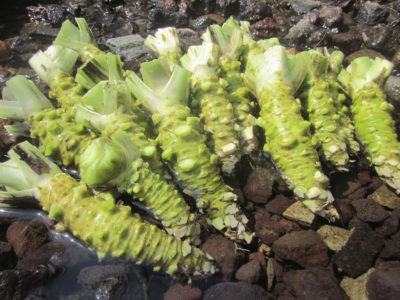 Wasabi has long been popular as a spice rooted in Japanese unique food culture. Flowers and wasabi leaves which comes to the best time to eat are precious recipe that bring spring to Kannabe. Our wasabi is used by famous restaurants and market all over Japan. 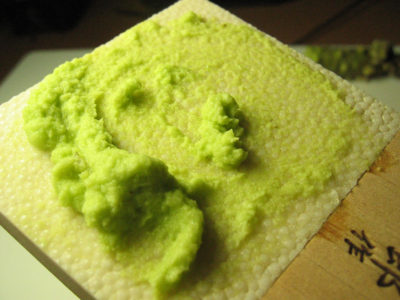 Our wasabi business is based on precious nature of Kannabe, wasabi field which has been inherited from our ancestors and many people supporting Kannabe Wasabi. We are strongly determine to keep distributing this unique flavor of this land.